Back in the 2G mobile days, I was writing Layer1 GSM software for a very prominent semiconductor company in that field (VLSI Technology). This was very a interesting technology, 2G was only starting to boom. We had the  opportunity to not only work on freshly adopted standard, but even sometimes to influence the committees work. You probably remember these epic phones, like Ericsson GH688 and other similar models 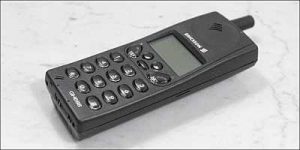 At that time, we had talks with the Ericsson development team, very nice and competent chaps. Their full software stack required 512 kBytes of ROM and 128 kBytes of RAM …. (pre-historical numbers, really !). Our own software was a little bit more demanding, but those were the figures commonly found at that time. A couple of years after, more features were bundled, especially in the UI, adding colors, menus. This naturally came together with more constraints on Memory am CPU . However, one thing remained constant: the battery autonomy ! Our design target was always 4-6 hours talk time and in the ballpark of 200 hours Idle ! Think about it, 200 hours means about one full week. The battery autonomy was also a very important comparison metric between models, we were all competing on battery autonomy ! This was the number one item for comparison.

Then came iPhone …. and the “1 day battery autonomy” paradigm. Suddenly, nobody cared anymore and we all accepted to plug the phone to the wall each evening.

OK, to be fair, today smartphones have nothing in common with those oldies …. and they do MUCH MORE task on top of Voice Calling. Nearly all the components changed radically, but I feel the battery didn’t that much. After all, those 200 hours relate to a mobile in “standby” mode, which means that it doesn’t do  “anything useful” (apparently). So to some extent, the comparison is valid.

Very recently, iFixit did a iPhoneX teardown (https://www.extremetech.com/mobile/258398-iphone-x-teardown-reveals-l-shaped-dual-battery-miniaturized-motherboard?source=mobile) and I am still very disappointed to see that Apple tackled this problem by using ….. 2 batteries !

So, I am still waiting for the technology shift in this area, so we have really dependable terminals.